The nation’s capital played host to the Australian interior fitout industry’s major awards programs on Sunday 27th October and fittingly featured winners from all over Australia.

The ASOFIA (now known as IFA) 2018-2019 Interior Fitout Awards, are the highest honours of shopfitting and celebrate the wealth of talent within the industry that delivers innovation and creativity to retail, hospitality and office spaces everywhere.

As shopping centres move more into leisure and entertainment centres, retail design and aesthetics have continued to create spaces that invite us to stay awhile and enjoy not only the shopping but also the environment. The Awards, hosted by IFA – Interior Fitout Association (formerly ASOFIA), recognise the outstanding contribution the industry is making, in changing the way we shop.

With 22 categories, entries were received from across the country, with the winners announced in conjunction with the Association’s 22nd National Conference in Canberra.

Sponsored by Laminex, the Awards once again highlighted some incredible examples of beautiful design and craftsmanship – in restaurants, clubs, healthcare, commercial office spaces and more – all completed over the past 18 months.

Gerard Ryan, CEO of IFA, has once again praised the outstanding level of works submitted for the Awards. “The standard of fitouts continues to rise, and the level of design we are seeing is extraordinary. The fitout industry is rising to the many new challenges in retail, and showing the talent that exists within our membership,” Gerard said at the Awards ceremony.

The highly sought-after National Interior Fitout of the Year Award went to RYDE JOINERY, for their multi-million-dollar T4 Gaming fitout at Canterbury League Club. The stunning refurbishment features custom joinery, timbers, metal surfaces, stone and laminates to create a complex and beautiful space that is unique and luxurious.

“This is one of the most incredible fitouts, in every way. A thoroughly deserved win,” Gerard said.

And it wasn’t just the big-dollar projects which were successful. Clever design and quality construction were the standout elements in the winner of the ‘Fitout up to $150k’ category.  INDETAIL JOINERY won this honour with their stylish fitout of Act of Wine in Victoria.

The Best Use of Laminex award was taken out by PRESTIGE JOINERY, for their impressive use of this adaptive product across kitchens, work hubs, a childcare fitout, reception areas, pods and more.

“Each year, the entries are more and more impressive. The industry is really taking on the changing face of retail and making it more creative, more professional and more exciting. The winners presented stand-out projects worthy of recognition – not only at our Awards but across the industry,” Mr Ryan said.

One of the more unique categories, the Australian Made Award, celebrates all things Australian and recognises those companies that integrate Australian materials, promote Australian manufacturing and support local master tradespeople. This year the award was taken out by UNITA, for their Place Woolloongabba office fitout – a one-of-a-kind boutique workspace tailored to work within one of the area’s oldest buildings, complimenting the history of the building and the innovative brand of the occupants.

At a state level, RYDE JOINERY took out the NSW award for their glamourous fitout of the Canterbury League Club Banyan Café while Victoria’s ONE68 won their state award for their extensive, custom re-build of the Ocean 12 nightclub. Tasmania’s award was taken away by VOS CONSTRUCTION & JOINERY for their beautifully finished project Eternal Women’s Health, and in Queensland, a high-end fitout of a Louis Vuitton retail space saw PROJECTS QUEENSLAND pick up the prize. Another fashion retail space was deemed the winner in Western Australia, where DIVERSE SHOPFITTERS were awarded the top spot for their Camilla and Marc design. 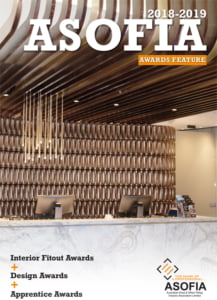 Click the
image above
to view the
digital version!

This publication was produced during the time the Association was known as ASOFIA. 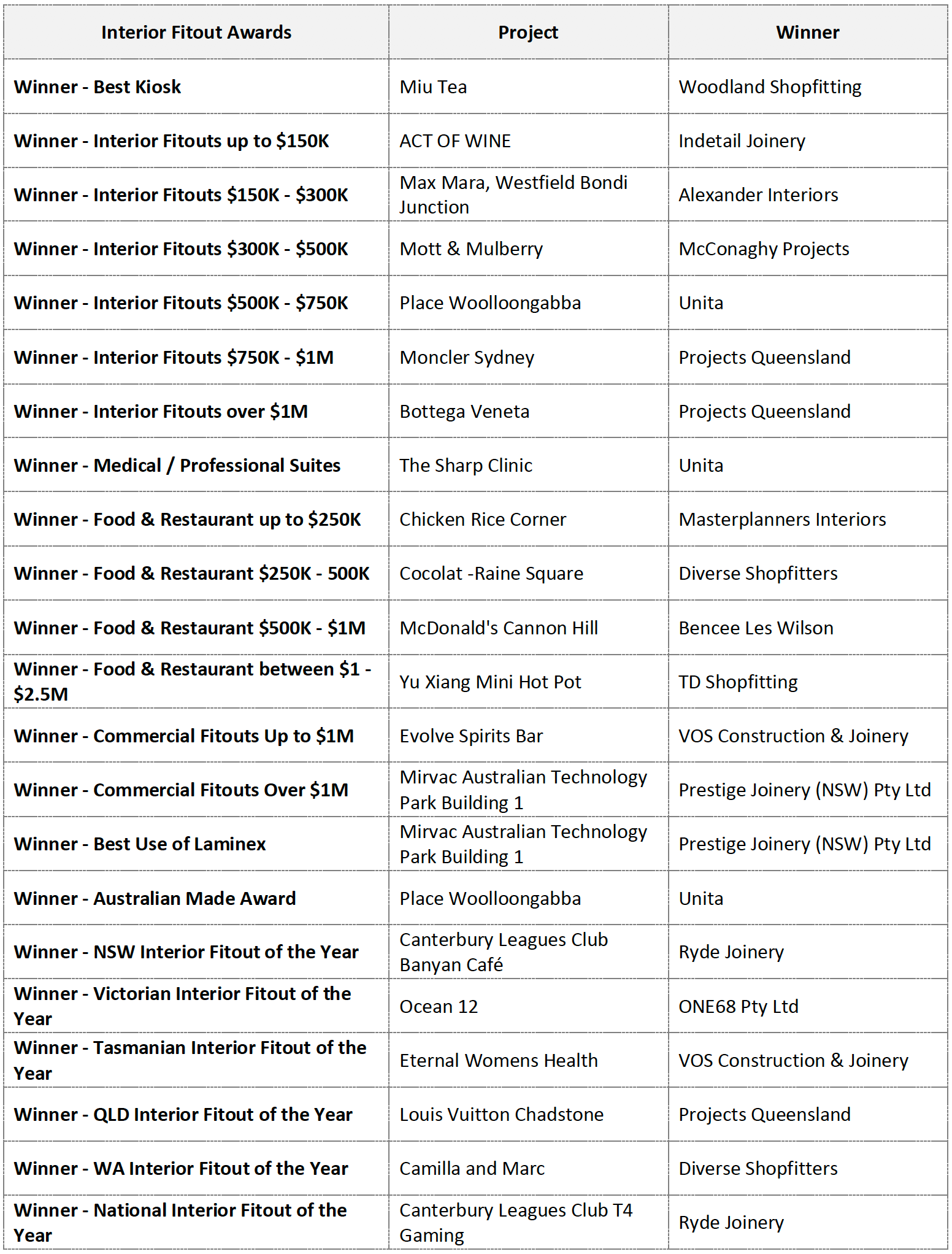 We may request cookies to be set on your device. We use cookies to let us know when you visit our websites, how you interact with us, to enrich your user experience, and to customize your relationship with our website.

Click on the different category headings to find out more. You can also change some of your preferences. Note that blocking some types of cookies may impact your experience on our websites and the services we are able to offer.

These cookies are strictly necessary to provide you with services available through our website and to use some of its features.

Because these cookies are strictly necessary to deliver the website, refusing them will have impact how our site functions. You always can block or delete cookies by changing your browser settings and force blocking all cookies on this website. But this will always prompt you to accept/refuse cookies when revisiting our site.

We fully respect if you want to refuse cookies but to avoid asking you again and again kindly allow us to store a cookie for that. You are free to opt out any time or opt in for other cookies to get a better experience. If you refuse cookies we will remove all set cookies in our domain.

We provide you with a list of stored cookies on your computer in our domain so you can check what we stored. Due to security reasons we are not able to show or modify cookies from other domains. You can check these in your browser security settings.

We also use different external services like Google Webfonts, Google Maps, and external Video providers. Since these providers may collect personal data like your IP address we allow you to block them here. Please be aware that this might heavily reduce the functionality and appearance of our site. Changes will take effect once you reload the page.

Please enter your email address to have your password sent to you.